History of the Carnegie Library

The first thoughts of a public library came from two local teachers, Professor Tiffany and Miss Pitts in 1897. The idea was then carried forward by a local woman named Mrs. Jesse Webster, a member of the Port Angeles Reading Club.

Port Angeles mayor, E.J. Walton, was also working toward a public library for the city. In 1908 he began informal inquiries with the Carnegie Foundation for funding support. After a long arduous process, a firm commitment for funding was finally received on April 29, 1918 in the amount of $12,500. The city contributed $500 to the project for a total design and construction budget of $13,000.

On January 5, 1919, the builder, Mr. Chris Kuppler, opened the doors to the public for the dedication. Mayor Walton presided over the ceremony with glowing descriptions of the building's central space, the expansive upstairs reading room:

"..woodwork finished in golden oak (fir), to match the furniture, the buff tinted walls and beamed ceilings with attractive fireplaces at each end added to the comfortable homey atmosphere."

Port Angeles' Carnegie was one of the last libraries funded by the Carnegie Corporation in the nation. By the time it was built, 37 other Carnegie libraries existed in the State of Washington alone.

An addition to the library was constructed in 1967 to increase the capacity and floor area. However, by 1998 the community had outgrown the old library and had moved into it's current building on Lauridsen Boulevard.

Our Future Honors Our Past

Located at 207 South Lincoln Street in Port Angeles, the Carnegie building is a piece of history in itself. Dedicated in 1919, the building has been beautifully restored.

Since 1948, the Clallam county Historical Society has been dedicated to keeping the history of the North Olympic Peninsula alive.

For more information about the Clallam County Historical Society visit their website. 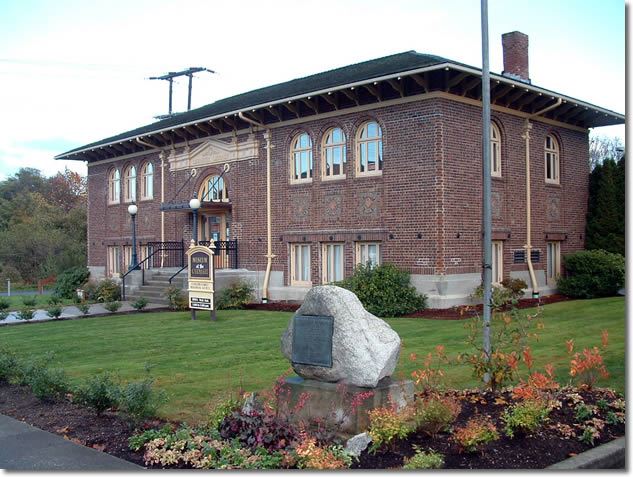 First thoughts of building restoration began in 1994, when the bond measure allocating funds for the new library included a provision for some of the funding to go back to renovating or restoring the old structure. Actual restoration work started in September of 2002, and was completed in June of 2004.

The Clallam County Historical Society was also very interested in seeing the building restored. In 1998, they presented a proposal to the city that the building be restored and used as a "Heritage House", a museum to recount local history from the time of Lewis and Clark.

The Clallam County Historical Society was instrumental in allowing the building to be fully restored. They worked closely with the city in obtaining all of the grant funds that were eventually used on the project.

Restoration of the structure included fabrication of replicas of all of the original ornamental metal work, including scrolled pediment, pilasters, and candelabra. Original flooring and fire places were refinished and restored on the interior of the building. Hard wood windows were fabricated in the 1918 design.

The museum is a great addition to the beautiful historical buildings in Port Angeles. It will increase tourism in the area and encourage greater foot traffic and involvement in our downtown business district.

The City of Port Angeles Carnegie Library Revitalization project was confined to an urban environment. Due to the close proximity to Peabody Creek, silt fencing and other erosion control measures were required to keep silt and debris from reaching the creek.

The contractor also took great care to maintain the original driveway surface behind the building and to regularly sweep the road in front of the project, as the run-off from the road directly enters the Port Angeles harbor. Acid based solvent used to clean the salvaged brick was carefully applied to the exterior facades and then disposed of off site.

Newspaper, radio, and public meetings were used to create public support and enthusiasm as well as to help the city complete the project.

A campaign was held during the duration of the project to try to find brick that was fired in a local quarry in 1919 and used in the building construction. The project architect believed that the brick would have been commonly used then and placed in fireplace hearths and other structures locally.

Although the community responded and found some of the historic brick, not enough was found and a small area of new brick was laid in the back of the building. Other donations that were made by the public include one of the beautiful iron candelabra on the Carnegie's front porch.

At the completion of the project a public ceremony was held honoring the building preservation and museum opening.

The ceremony was attended by Congressman Norm Dicks who helped secure 16% of the project funding through the Save America's Treasures Federal grant.