Due in large part to the initiative of Corporal Kevin Miller and the generosity of the Atlantic Richfield Corporation (ARCO), the Port Angeles Police Department K-9 unit became a reality.

Corporal Miller researched and demonstrated the need for a K-9 program, and ARCO provided a grant that paid for a Dutch born German Shepherd, equipment, and for the unit's training. 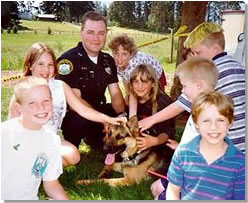 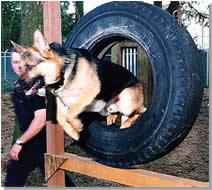 A K-9 obstacle course was constructed by Corporal Miller and now retired Sergeant Jim Baertschiger. With the help of local businesses and organizations, Kevin and Jim constructed a course to be envied on land donated by the Port of Port Angeles.

On October 15, 2007, at 1:13 a.m. Port Angeles Police Officers were dispatched to a vehicle prowl in-progress in the 100 block of West Seventh Street. Witnesses saw the suspects flee the area in a passenger car and provided a description. When officers arrived in the area, two suspects were seen in a vehicle matching the suspect vehicle description. A short pursuit ensued for several blocks. Ultimately, the suspects abandoned their vehicle in the middle of a resident's yard. The vehicle contained stolen audio equipment. The area was quickly contained for a K-9 track of the suspects.

K-9 handler Corporal Kevin Miller and his K-9 partner, Arco, were deployed to track the suspects. A short time into the track, Arco collapsed. He was rushed for medical treatment, and it was later determined that he had suffered a stroke. However, Arco appeared to have rebounded and was back on his feet. But over the next week it was evident that he was not the same.

On October 18, 2007, he was taken to the veterinarian for a further exam. X-rays revealed that Arco had an enlarged heart, and he was officially retired the following day. Arco's condition rapidly deteriorated, and he was put to rest on November 9, 2007, only sixteen days before completing 11 years of service for the City of Port Angeles.

Arco sustained numerous injuries over the years. The most significant were the loss of two canine teeth and a fractured rib from various confrontations with suspects. However, in almost 11 years of work he never missed a day.

During the course of his career, Arco recorded 362 felony apprehensions as well as locating evidence that led to both felony and misdemeanor convictions. Arco was cross-trained for narcotics and was responsible for hundreds of drug finds. His accolades include the apprehension of a murder suspect, numerous accreditations, certifications, and "Top Dog" awards.

A tribute video for K-9 Arco was created and posted for all to watch. Special thanks to Rik Scairpon for sharing this video with us!

In 2002, Officer Brusseau was selected to handle a second police dog. Corporal Miller and Officer Brusseau chose another German Shepherd named Kilo. Kilo was born in 2001 and imported from Germany. He was commissioned on April 8, 2003. Throughout his career, Kilo had a total of 235 applications, 69 apprehensions, 92 building searches, 46 demonstrations, 38 evidence finds, and 61 narcotics finds. K-9 Kilo was a dual purpose dog and served for ten years with the Port Angeles Police Department, before being retired in 2013. 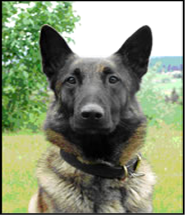 After an extensive nation-wide search, the Police Department welcomed K-9 Jäg to the Department in 2008. K-9 Officer Jäg is a Belgian Malinois who was imported from Germany. He was a "green" dog when he arrived at the department, but he did have some fundamental obedience skills. Jäg successfully completed our training academy, state certification, and received his letter of accreditation from the Washington State Police Canine Association. Jäg is now working the streets as a patrol dog, and is handled by Corporal Kevin Miller.

The Port Angeles Police Department extends its gratitude to British Petroleum. BP's generosity funded the purchase and training of Jäg. Because of BP, the safety of our officers and citizens will be enhanced for years to come.

K-9 Bogey, a German Shepherd, joined the Department in 2013. Called "Bogey" because of his speed and dark coloring, he was imported from the Netherlands in September of 2012. Port Angeles Police Department K-9 hosted a Basic K-9 academy (400 hours), to train Officer DeGand and Bogey. Within a month of going operational, K-9 Bogey and Officer DeGand had made three apprehensions of suspects.

Officer DeGand has been with the Port Angeles Police Department since January 2011. He previously served as a deputy with the King County Sheriff's Office. 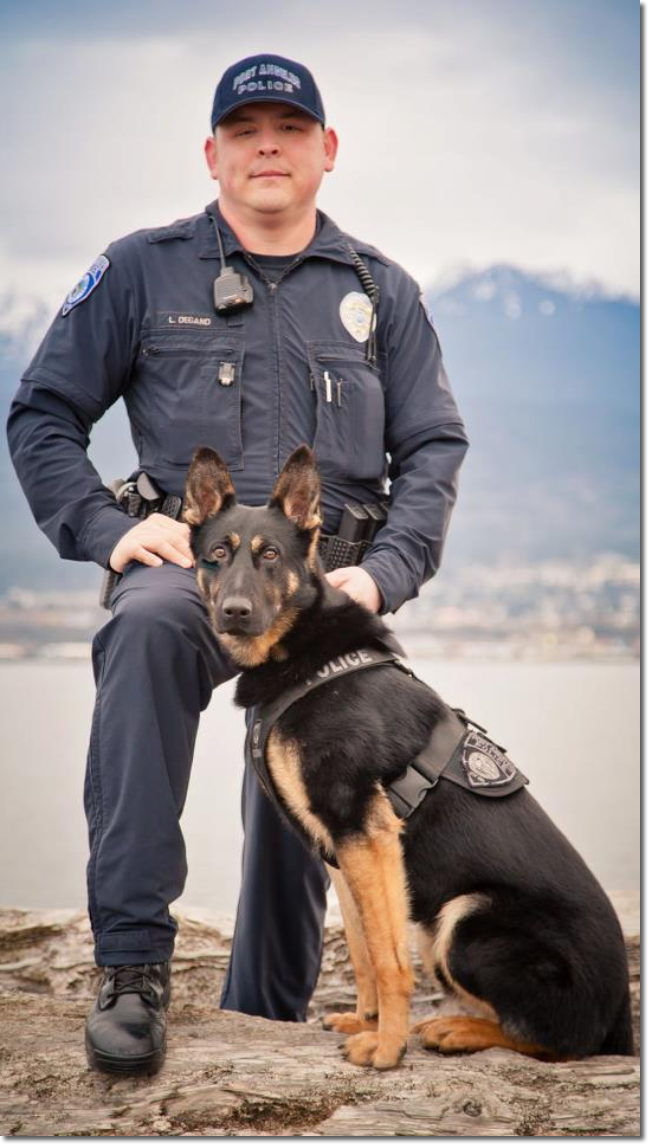